It is provided as a plug-in to nmrPipe. It must be installed along with nmrPipe, and requires a version of nmrPipe posted October 14th 2016, or later. More information can be found here.

The data conversion is best done using the bruker program that is supplied with nmrPipe. The only thing that’s necessary for the bruker program to recognize your dataset as an NUS dataset is that a file called nuslist exists in the data directory. If you’ve acquired the data using TS2, just rename the file sched to nuslist.

Starting in your data directory, type:

This will bring up the usual GUI, with NUS features added:

All the important information, including all the NUS information, will be read in automatically when you click “Read Parameters”. You’ll probably have to adjust the usual things like “Center Position”.

This will generate a script (fid.com) which does the data conversion:

Example 2: SMILE used as an alternative to linear prediction to extend a constant time

SMILE can also be used to predict data points at the end of uniformly sampled data. For example, to extend a constant time. It works much better than linear prediction, and it’s very easy to implement. The conversion is done exactly as the conversion of any normal (ie, not NUS) dataset:

This will bring up the GUI, but without the added NUS stuff. It will generated the usual fid.com script:

Rename the sched file to nuslist and start the bruker GUI:

As before, click “Read Parameters” in the GUI, and adjust things like the “Center Position”. It will generate a conversion script (fid.com) appropriate for a 3D dataset acquired using NUS:

One very nice feature of the new bruker conversion is that it sorts and expands the NUS data into a larger matrix (the size that the uniformly sampled dataset would have been), and places zeros into the not-sampled points:

The data can then be processed normally (with no reconstruction). This is exactly like processing any normal (not NUS) data using nmrPipe.

Reconstruction is done in nmrPipe using the new function SMILE. This is illustrated using the same three examples as above:

*One non-standard thing in this script is that the value of the parameter xT is 250. This parameter controls by how much the original data is extended. The default value is 0. If “-xT 0” is set, then the data in the reconstructed dimension will be extended by 50% (the default). In this case, there were 125 complex points collected (but 50% sparse, of course), so it would have been extended to 187 or 188 points. I wanted more resolution, so I set “-xT 250” to force it to extend out to 250 complex points. That is – in addition to filling in the missing points in the the first 125, it also uses SMILE to fill in (or predict) 125 additional points.

Example 2: SMILE used as an alternative to linear prediction to extend a constant time 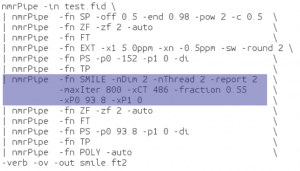 In this case, the spectrum was uniformly sampled, so there is no nuslist. However the SMILE function used with the parameter xCT set to 486, tells it to use SMILE to extend the original 243 complex points out to 486 complex points. Again, the indirect dimension phases must be set during the reconstruction as well as during the final processing. 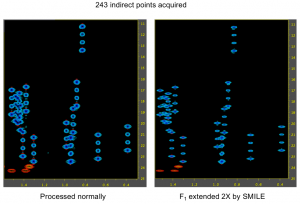 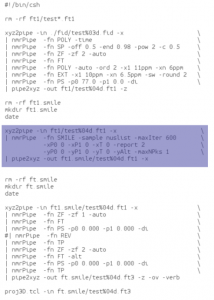 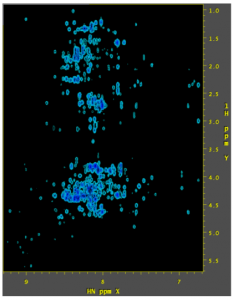 back to Non-Uniform Sampling experiments